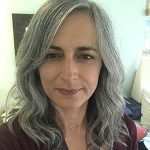 My story doesn’t have a clear beginning, and certainly not an ending. At least not yet. I’ll start in January 2017, when I took my first watercolor class. I had wanted to explore the medium for a long time, and I was also desperate for a creative outlet. The previous November, at the age of 45, after a lifetime of progressive hearing loss, I had become deaf. I could hear only muffled sounds, speech was garbled, music was just distorted noise. This loss was particularly difficult for me because I am a classically trained violist. So I signed up for class, once a week through the winter months. It allowed me to take what had become an incoherent world and bring it into focus by tuning into the sensual experience of observation and watercolor painting. I was, and still am, fascinated by the fluidity and transparency of the paints. I had found clarity in an otherwise murky world. I discovered that I could apply all the discipline, patience, and courage that I learned from my life in classical music to each painting. And perhaps more importantly, through each attempt at painting a flower, a twig, a rock, I let myself grieve for my hearing; I let myself feel the bottomless sadness and despair that I couldn’t allow to surface at other times. They say that when you lose a sense, all your other senses become more acute. Slowly, I was becoming increasingly connected to nature, observing my surroundings with an intensity previously unknown to me. Plants unconditionally and silently offered me their beauty. I became curious about them, and wanted to learn about their life and inner workings. I started reading books about botany and took some online tutorials on botanical art. At the same time, I was evaluated for a cochlear implant, and my medical team was strongly encouraging me to get implanted. I spent several months trying to decide if I wanted to undergo such a radical procedure. I am aware that to the medical profession, the surgery may not seem radical, but the idea of having someone cut into my head, drill through my skull, and install electrodes in my cochlea was terrifying. However, life as a late-deafened person was also terrifying. I feared that I would lose everything that was dear to me: my husband, my job, life as I knew it. In December 2017, fourteen months after becoming deaf, I was implanted in my right ear. I painted through six weeks of recovery before the implant was turned on. I spent 2018 learning how to hear through the implant. I was initially thrilled to hear sounds again, even if they were often incomprehensible, turning me into a perpetually confused person. After the initial thrill wore off, however, I had to come to terms with the fact that there is no cure for deafness, that I will never again hear like I did before the relentless condition that caused my deafness set in. I’m still grappling with this truth, and throughout the journey, I keep going back to my watercolors. In the summer of 2018, only six months after being implanted, I was fortunate to attend a workshop in Italy with one of my favorite botanical artists, Elaine Searle. It was the first time that I met a new group of people as a deaf person. To them, there was no narrative attached to my deafness; they didn’t know me as the musician who went deaf, and it was liberating. I cherished every interaction I had, every teaching from Elaine, every hour I spent in the studio. I’m at the very beginning of this journey. My confused and incomplete perception of the world has not become easier, or better. It’s becoming my new normal. At every chance I have, I continue to turn to watercolors and botanical art as a reprieve from the chaos of my daily soundscape. My observation skills are becoming more acute, and while there is no replacing the world of sound, my life is full and rich. And I’m grateful for it.